On 10 December, Israeli soldiers prevented teachers from the Qurtuba School, elderly people, a disabled man, and both a doctor and an ill woman 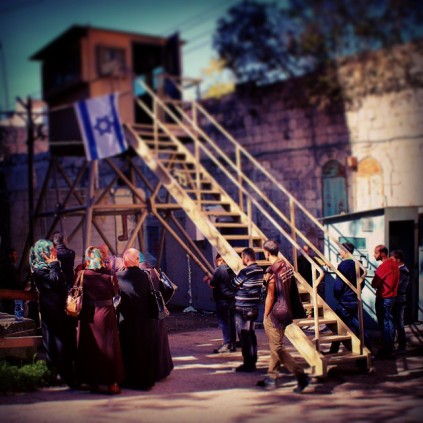 trying to reach the hospital from passing through Checkpoint 56 in Hebron.  In some cases, they delayed people trying to pass through for one hour; in others, as much as three.  Checkpoint 56 has been subject to closure and restrictions by Israeli forces since it was burned from the inside nearly three weeks ago.  No one knows who is responsible for the burning of the checkpoint, and Israeli forces have not released footage.  Leading onto the small section of Shuhada Street on which Palestinians are allowed to walk, checkpoint 56 connects Bab iZaweyya, the commercial district in Palestinian Authority-governed H1, with the neighbourhood of Tel Rumeida in Israeli-controlled H2. Checkpoint closure here demands that families living in Tel Rumeida and school children and teachers from the Qurtuba School walk an extra hour or that they walk a difficult route through the homes and gardens of other Palestinians to reach their homes.

For the past week, Israeli soldiers and border police have permitted elderly people, teachers, children and ill people seeking medical treatment to pass the checkpoint. When CPTers arrived at 11:00 a.m. on 12 December, one 60-year-old doctor told them that he had been at the checkpoint for two hours. CPTers, ISMers, and those wishing to pass through the checkpoint, attempted to ascertain the reasoning behind this change, which was subjecting teachers leaving work, and older people of varying

physical abilities to stand in the sun for hours.  CPT and ISM stood in solidarity with the affected Palestinians and joined them in negotiating with soldiers to reopen the checkpoint. At about 12:00 p.m., soldiers allowed individuals through the checkpoint one by one until approximately twenty minutes later when an elderly man arrived with a donkey, which initiated another arbitrary change in the ‘rules’ of occupation. The Israeli military again closed the checkpoint, and CPT was unable to gain an answer from the soldiers as to why this donkey appeared to necessitate another closure.